2020 Ohio’s Amish Country Quilt Festival Update
The Festival is still "a go", but with some major adjustments. The "new and revised Covid Plan" is to have a combination of in-person and virtual Festival. The in-person events will not be taking place at the original facility, but at the shops of the three sponsors. We will still have some classes, but the number is being pared down. SEE MORE 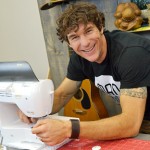 
Rob is a man who loves to sew and proud of it! Rob’s quilting journey began when he started working in his mother’s quilt shop, The Cotton Ball, in Morro Bay, California. His wife was working on her teaching credentials, so he needed to pick up some extra hours around the shop, and when the shop started selling Pfaff machines, he became a certified technician.  Although he had not sewn much, that quickly changed! Rob taught himself to sew by making 30 Aloha shirts, which yielded a wonderful wardrobe and tons of scraps, mostly batiks and florals. These scraps soon became his stash and fed his desire to learn free motion quilting. While he says that his first quilt wasn’t much to look at, his second quilt – The Dolphin Dance – was a huge hit! It’s an easy strip pieced quilt that has sold hundreds of patterns and countless kits. After the success of that quilt, Rob began teaching himself how to quilt using traditional techniques adapted for his domestic sewing machine. He soon became known for his quilted seascapes and was lovingly referred to as “that surfer dude who quilts.” Since 2001, Rob has made over 200 quilts from start to finish; and he loves to take work that he has created and build on those ideas so he can share that with as many quilters as possible.

Besides his current gig as Man Sewing with Missouri Star Quilt Company, he has appeared on Simply Quilts, Uncommon Threads, and The Quilt Show.

Join Rob on Thursday evening for his entertaining trunk show, where he’ll wow us with many of his wonderful creations and the stories behind them. Remember, life is short. Be creative and have fun!