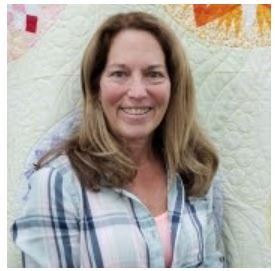 Lori started to sew with her mother at the age of 7 and she made hundreds of shirts, dresses, valances, table runners, curtains, etc.
She discovered her love of quilting in the early 1980’s and soon started dreaming of owning her own quilt shop. In June of 2001, Lori and her husband Steve retired after 20+ years in the United States Navy. While looking for ways to keep busy, Lori and Steve purchased a commercial embroidery machine and started a business - Threads Run Thru It -  in their home. In 2007, they expanded their business and purchased a longarm quilting machine. Following that dream from the 1980’s, Lori and Steve opened their first quilt shop in November of 2010. Threads Run Thru It continued to expand and in April of 2017, Lori and Steve moved the quilt shop to its current location in Rustburg, VA.

Lori is a Certified Judy Niemeyer (Quiltworx) Instructor and teaches numerous classes in her area, as well as offers retreats in a laid-back country setting.

You won't want to miss this trunk show in which Lori will share a multitude the quilts and projects she has created over the years.

Lori started sewing with her mother at age 7. She discovered her love for quilting in the early 1980’s. After retiring from the Navy as a Nurse, she focused more of her time on quilting and opened a quilt shop and retreat in 2009. Paper piecing soon became a large part of her shop. In 2014 Lori’s shop completed training to become a certified shop. Since then she has taught multiple Quiltworx classes including most of the Techniques of the Months. Lori’s love of Quiltworx patterns and being a part of the Quiltworx team, as a CI, has given her the opportunity to offer retreats in a laid-back country setting. She also has several classes a year at Threads Run Thru It quilt shop.


Class Cancellation Policy
Mark your calendar carefully since all admission
and class tickets are non-refundable.
Please send someone in your place
if you are unable to attend the Festival.